No substitute for the library: amateurs, truthiness, vandalism, and other nonsense

Whilst Wikipedia’s palimpsestic and collaborative nature has received praise for enforcing positive Web 2.0 ideals, it has also inspired much criticism for failing to achieve the self-described encyclopaedic content. Many side with author Mark Youngblood Herring (2007:28) who condemns Wikipedia as “no substitute for a library”. This viewpoint is shared by Melbourne University whose own Academic Skills Unit advise students to “never use information that you have found on Wikipedia in your academic writing” because it is “academically unreliable”. Notably, this is the first assignment in my entire student career, where it has actually been acceptable to quote Wikipedia as a reference. Gievn that traditional encyclopaedias are generally considered acceptable academic sources (see: Youngblood Herring (2007:29)), doubt is thus placed on Wikipedia’s self-description as a ‘free encyclopaedia’.

Former (failed) net entrepreneur Andrew Keen (2007:36)  is amongst those questioning Wikipedia’s right to call itself an encyclopaedia, arguing that the site fosters amateur content. In the documentary The Truth According to Wikipedia (Ijsbrand van Veelen 2008), the author claims that Wikipedia sparks narcissism in people, encouraging them to add their say to any given topic regardless of whether they know anything about it. The Academic Skills Unit supports Keen’s argument in its justification for why Wikipedia cannot substitute ‘academic sources’ saying, “the information it supports is unverifiable and may be added by almost anyone regardless of their expertise or knowledge”. According to Keen (2007:15), in comparing itself to an encyclopaedia, Wikipedia demeans the value of the professional or the expert and dangerously puts unworthy, amateur and unreliable content on the trustworthy pedestal.

But, Wikipedia supporters deny this argument, saying Wikipedia’s collaborative nature is simply more meritocratic than traditional forms and that subsequently, content improves rather than suffers. In the aforementioned documentary, net activist Ndesanjo Macha claims Wikipedia recognises that anybody can know something about a topic, regardless of whether they hold a PhD in it or not, and doesn’t discount the potential value of their input by giving them equal opportunity to contribute. He uses the average African as an example, stating that although they probably wont have a degree, they could have more to contribute on their culture and way of life than an outside academic observer. Also, P2p Foundation founder Michel Bauwens (2006) claims that Wikipedia’s openly editable nature makes the production fairer by organising itself on “equipotentiality”. He explains that rather than judging a contributor’s input by their education or experience, the community judges the “quality” of the contribution for it to remain or be edited accordingly. By not limiting information input to the few experts or professionals typical of traditional encyclopaedias, Wikipedia thus opens itself to more knowledge being contributed, thus increasing its potential to being a more informative source.

Another criticism against Wikipedia being a valid encyclopaedia, is that the website conveys a ‘truthiness’ instead of the absolute truth. As Wikipedia’s content is decided by its produsers rather than expertise on the matter, new media theorist Robert Cummings (2008:13) claims “truth established through consensus opinion rather than verified facts”. In the aforementioned documentary Robert McHenry, the former-editor-in-chief of the traditional encyclopaedia paradigm Encyclopaedia Britannica, also criticises this process He claims Wikipedia’s creators are all old hippies that are still “anti-authority” and distrusting of former “more effective” one-to-many editing processes. McHenry claims that the website consequently can only claim to convey ‘truthiness’ rather than ‘truth’, as it has no been verified by identifiable professionals as in traditional encyclopaedias.

Similarly, this reliance on the Wikipedian community to edit and ultimately decide on the website’s content makes Wikipedia more susceptible to vandalism than traditional one-to-many encyclopaedias. Media theorist Mark Elliott (2006) claims that Wikipedia is a “stigmergy”, wherein its contributors act like ants building an anthill. He says contributors add to Wikipedia like ants do to their own section of the hill, without having to consult others, and without possibly visualising what the whole looks like. Given the sheer enormity of Wikipedia, Cummings (2008:12) thus argues that deliberate jokes and lies could quite conceivably slip between the lesser-viewed entries that better-intending Wikipedian editors don’t see.

But whilst Wikipedia’s admirers can see these shortfalls, they argue the collaborative nature ultimately fosters more accurate information than its more traditional counterparts in the long-term. Benkler (2006, 72) argues that Wikipedia enforces a “commons-based production”, whereby the majority of produsers contribute for the greater good of improving the encyclopaedic project, with the belief that their efforts will be rewarded with other good information from similarly well-intending users. Rather than creating a stigmergy, he argues the sheer enormity of the mostly well-intednding wikipedian community acts in the websites favour by increasing their reasoning and editing capabilities.

I  tested these editing capabilities firsthand by spreading some blatant lies under an obviosuly destructive username, and seeing whether Wikipedians would detect them. As ‘nonsense prophet’, I changed the number one song of Triple J’s Hottest 100 of All Time countdown of 2009  and edited Where’s Wally character description(see figures 1 and 2) The articles were presumed to be fairly trivial, and consequently easy to slip under the well-intending produsers’ radar if the stigemergic theory were correct.  But, the Wikipedian community proved triumphant. The Where’s Wally edit was removed within an hour of its ridiculousness being unleashed unto the world, and Devo’s newfound glory was rightfully replaced by Nirvana within 12 hours. Even though it is not academic to draw generalisations from such a small sample of edits, for the purposes of proving a point, it appears the collaborative nature of Wikipedia is much more inclined to do good then evil. Furthermore, the effort required to register a name (other attempts like ‘BS Artist’, ‘Outright Liar’ and ‘Rewriting History’ were already taken), find an editable article (more important, controversial articles are under locks that limit editing to respected Wikipedians) and then actually edit it, the whole process seemed rather futile when paled against the single click it took helpful produsers to delete them.

It is no secret that Wikipedia is not always accurate (the website itself claims so here), so users are encouraged to be weary of mistakes and carry out further research if necessary. As a result out-dated information (or vandalism) is more likely to be detected by one of the thousands of produsing eyes using the site, and more likely to be changed than if it claimed to be a finished product, like traditional encyclopaedias. Benkler (2006:72) argues wikipedia has a stronger ”correction mechanism” than conventional encyclopaedias, providing a “robust model of reasonably reliable information”. Another media theorist Joseph Reagle (2010:169) claims the majority of Wikipedians work with the shared visions enshrined in the website’s Five Pillars as well as a general “good faith” in other community members also striving to create the best content possible. Creative Commons founder Lawrence Lessig (2007) also lauds Wikipedia’s collaborative nature for acknowledging that many truths can exist, and that truths can change regularly. As Bruns (2008) explains, traditional encyclopaedias are often in denial over this idea, claiming that they reveal true information whilst needing to be revised and edited regularly. Internet analyst Clay Shirky (2005) sums up the value of Wikipedia’s palimpsestic and collaborative models of production, stating that unlike traditional encyclopaedias, Wikipedia’s accuracy improves with age. He states:

“Wikipedia is not a product, it is a system… it is messier than planned systems at any given point in time, but it is not just self-healing, it is self-improving. Any given version of Britannia gets worse over time, as it gets stale. The Wikipedia, by contrast, whose version is always the Wiki Now, gets better over time as it gets refreshed.” 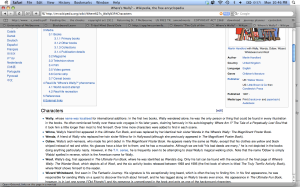 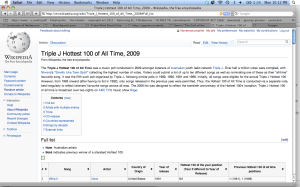 1 Response to No substitute for the library: amateurs, truthiness, vandalism, and other nonsense